I haven’t had a really good long run in probably a month. This weekend was the weekend between half marathons (I’m an idiot when it comes to signing up for races). I had 11 on the schedule, looked at it, and promptly decided that I would not be running 11 miles. I had a crappy race last weekend and didn’t want to push myself on Sunday.

Sara posted something on twitter about needing to get a long run in this weekend as well. We are both running Tyranena next week so I figured she would be running a similar distance. Several tweets later we had plans. Originally we were going to run at 7:00am on Sunday morning, but she messaged me Saturday night and I happily agreed to meet her at 10:00 instead. Both of us had 8-10 planned, neither of us had time goals, nor really cared where it fell in the 8-10 mile range. It was so nice to run with someone. We just ran the Oak Leaf Trail, which is one of my favorite places to run.  There was a strong wind coming from the south and the wind definitely tried to kill us on our way out, but it was fantastic on the way back. We talked about all kinds of things and the miles just flew by. With the Tyranena Half next weekend and our running speeds and PRs so similar I am guessing we will end up running together again.

Our pace was great, especially considering we both thought we were going to be slower. I’m impressed with how even our splits were. Mile 3 was against the wind and up one of the bigger hills. 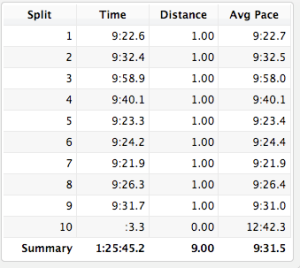 It really was the perfect long run. All the pieces game together. It was just what I needed.