I’m trying really hard to not be someone who posts about every run or workout they do because that’s f-ing obnoxious and I don’t want to be that person. But I am SO excited about every run. I still can’t really believe that I am doing this again. I can’t believe my body is letting me. In the last week, I have switched from walking 3 minutes/running 2 minutes to walking 2 minutes/running 3 minutes, meaning I am running more than I’m walking! It feels good. It feels natural. I don’t even mind that I’m running circles around the park. (It’s 1.5 miles around the park, so it’s not really that bad.)

This is my fastest 5K so far. My initial goal was to get to 1 minute walking/4 minutes running by the Bacon Race but now my secret goal is to run the whole thing. I still have a month to get there. I don’t have a clue what my pace will be, but I do know I’ll be able to run most, if not all, of the 5K.

I’ve been consistently going to Yin Yoga now for a few weeks and it continues to feel good. Especially when I’m stupid and run three days in a row. Strangely enough, my body still doesn’t like that. The yoga feels great and I know the stretching is good for me. I’m already excited to move on to more advanced classes, but I’m also terrified of what my body can’t do. Almost every morning my body is tight and it takes me a bit to loosen up as I walk downstairs. It doesn’t hurt or feel heavy anymore. It’s mostly just a reminder that my body is still healing. 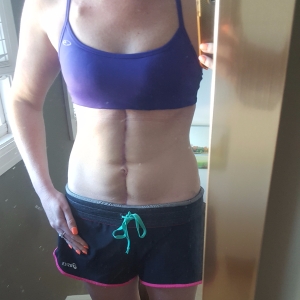 This is the scar down the middle of my body. This isn’t even the whole thing. It goes lower than I’m willing to share with the world. I’m not embarrassed by my scar and I’m willing to share it now because it’s healing really well and I’m no longer ridiculously underweight. It’s not allowed to get sun though so I had to buy new swimsuit tops. My body was literally cut in half and I have to remember, which isn’t hard to do, that it takes time and each step is an accomplishment. Someday I might have abdominal muscles again.

5 thoughts on “Running in Circles”